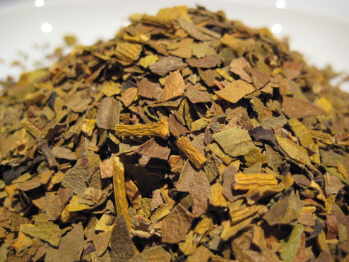 Mistletoe, sometimes called European Mistletoe or Common Mistletoe, has attracted lots of interest due its use in some adjuvant (a substance that, when added to a medicine, speeds or improves its action which aids another, such as an auxiliary remedy) cancer treatments because of its effects in stimulating the immune system.

Generally, other tumour destructive therapeutical regimes (like radiotherapy, surgery and chemotherapy) cause the body’s immune system to become surpressed. It has been shown, however, that if substances which stimulate the immune system are used in combination with these tumour destructive approaches the rates of tumour relapses, metastases and side effects would decrease, and that survival in patients would be prolonged (Fukazawa et al, 1994).

It is a hemiparasite on several species of trees, from which it draws water and nutrients. It has a significant role in European mythology, legends, and customs. In modern times, it is commonly featured in Christmas decoration and symbology.

It is very rarely found on the North American continent as an introduced species; its cultural (such as Christmas decoration) roles are usually fulfilled by the similar native speciesbut its medicinal use is confined to this species.

Mistletoe extracts contain a variety of components. The major biologically active component believed to have a role in its immunostimulatory effects is mistletoe lectin (ML). Studies have shown that these increase the activity of cells of the immune system (particularly lymphocytes, monocytes and granulocytes), enhance the release of cytokines (chemicals that control the immune response) and also decrease the ability of tumour cells to proliferate (Beuth et al, 1996).

It was also shown that they lead to the increased proliferation and maturation of these cells, increasing their number and the effectiveness of the immune system. Regular injections of the optimal dose of mistletoe extracts have been shown to compensate for the immunosuppressive effects of anti-tumour therapies, leading to an improved quality of life for cancer patients (Lenartz et al, 1996).

Diabetes mellitus, a condition where there is a lack of the pancreatic hormone insulin (important in regulating the blood sugar level) has also been documented as being treatable by mistletoe. A tea prepared from the leaves Mistletoe  has traditionally been used in the West Indies for diabetics. It has been shown that extracts of mistletoe evoked a 1.1 to 12.2 fold stimulation of insulin secretion from clonal pancreatic B-cells in the laboratory (Gray et al, 1999), providing evidence for the presence of insulin-releasing natural products in Viscum album that may contribute to the reported anti-diabetic property of the plant.