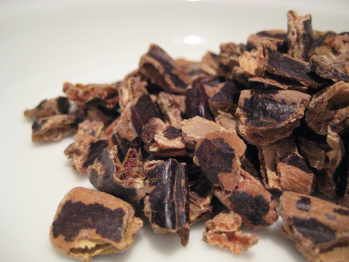 The carob tree ( Ceratonia siliqua ) from which Locust Beans are obtained is a species of flowering evergreen shrub or tree in the pea family, Fabaceae, that is native to the Mediterranean region, as well as Iran and the Middle-East, Portugal and probably the Canary islands. It is cultivated for its edible seed pods.

They are also known as St. John’s bread because, according to the tradition of some Christians, St. John the Baptist subsisted on them in the wilderness.

Carob, dried or roasted has a slightly sweet taste and in powder, known as Carob Powder, or chip form (this product) is used as an ingredient in cakes and cookies. Carob is sometimes used as a substitute for chocolate. The wholes seeds are known as locust beans, and can be used as animal feed. They are also the source of locust bean gum, a thickening agent used in numerous processed foods.

In Egypt, Locust Beans are consumed as a snack. Crushed pods are used to make a refreshing drink. Compotes and liqueurs are made from the beans in Turkey, Malta, Portugal, Spain and Sicily.

Carob has also been used as a non-toxic alternative to chocolate in dog treats, as the theobromine in chocolate is fatally toxic to all animals, even humans in high enough doses (in raw form).

Locust Beans were eaten in Ancient Egypt. It was also a common sweetener and was used in the hieroglyph for “sweet” (nedjem). Dried carob fruit is traditionally eaten on the Jewish holiday of Tu Bishvat. Locust Bean juice drinks are traditionally drunk during the Islamic month of Ramadan. Also it is believed to be an aphrodisiac.

On the islands of Malta and Gozo a syrup (?ulepp tal-?arrub) is made out of carob pods. This is a traditional medicine for coughs and sore throat. A traditional sweet, eaten during Lent and Good Friday, is also made from Locust Bean pods in Malta. However, the pods were mainly used as animal fodder in the Maltese Islands, apart from times of famine or war when they formed part of the diet of many Maltese.

In the Iberian Peninsula Locust pods were used mainly as animal fodder, especially to feed donkeys.