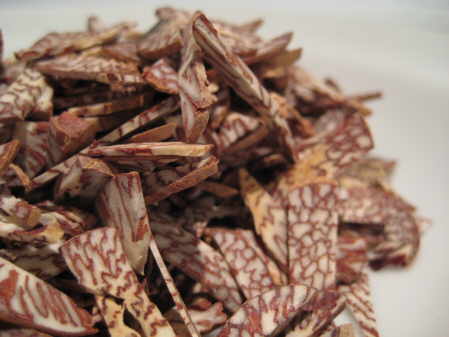 The areca nut is not a true nut but a drupe. It is commercially available in dried, cured and fresh forms. While fresh, the husk is green and the nut inside is so soft that it can easily be cut with an average knife. In the ripe fruit the husk becomes yellow or orange and, as it dries, the fruit inside hardens to a wood-like consistency. At that stage the areca nut can only be sliced using a special scissor-like cutter (known as AdaKitta (????????) in Marathi, Jati in Bengali, Sarota in Hindi, Paakkuvetti in Malayalam, Adake kattari in Kannada, Paakkuvetti in Tamil and A?akattera in Telugu, “sudi” in Gujarati, “Giraya” in Sinhala).

Areca nuts are chewed with betel leaf for their effects as a mild stimulant, causing a mild hot sensation in the body and slightly heightened alertness, although the effects vary from person to person. The effect of chewing betel and the nut is relatively mild and could be compared to drinking a cup of coffee. The areca nut contains tannin, gallic acid, a fixed oil gum, a little terpineol, lignin, various saline substances and three main alkaloids: Arecoline, Arecaidine and Guvacine which have vasoconstricting properties. The betel leaf chewed along with it contains eugenol, also a vasoconstrictor. Many chewers also add small pieces of tobacco leaf to the mixture, thereby adding the effect of the nicotine, which causes greater addiction than the drugs contained in the nut and the betel.

In China, East and North-East India areca nuts are not only chewed along with betel leaf but are also used in the preparation of Ayurvedic and Traditional Chinese medicines. Powdered areca nut is used as a constituent in some tooth powders. Other medicinal uses include the removal of tapeworms and other intestinal parasites by swallowing a few teaspoons of powdered areca nut, drunk as a decoction, or by taking tablets containing the extracted alkaloids.