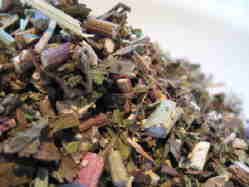 Eupatorium Herb (Eupatorium perfoliatum) is a very populous perennial plant native to the Eastern United States and Canada but now grown all over the temperate parts of the Northern Hemisphere.

It is also known as Common Boneset, Agueweed, Feverwort Thoroughwort, Snakeroot and Sweating Plant. The genus is named for Mithridates Eupator who was an ancient King of Pontus

Traditional Uses and History of Eupatorium:-

Despite one of  its common names being Boneset is not used to treat broken bones at all but to treat Dengue Fever which was also once called Breakbone Fever principally because it caused so  much pain.

The name Thoroughwort also comes from Eupatorium perfoliatum, and refers to the perfoliate leaves, in which the stem appears to pierce the leaf (i.e. go through, note that in older usage “thorough” was not distinguished from “through”, compare for example the word thoroughfare).

The plant was introduced to American colonists by Native American Indians who used the plant for breaking fevers by means of heavy sweating. It is nearly always found in low, wet areas.

It was once used in the traditional medicine of Native Americans who made it known to colonists of the time but it is used even today herbal medicine for relief from fever and colds. It is also used to rid the body of excess Uric Acid and as a result it was often once used in the teatment of gout.

The effects of Eupatorium perfoliatum have not been confirmed by clinical study so it is largely from folklore and tradition use that it has been employed, however, animal studies and in vitro experiments with plant extracts indicate possible anti-inflammatory effects and activity against Plasmodium falciparum, the parasite that causes malaria.