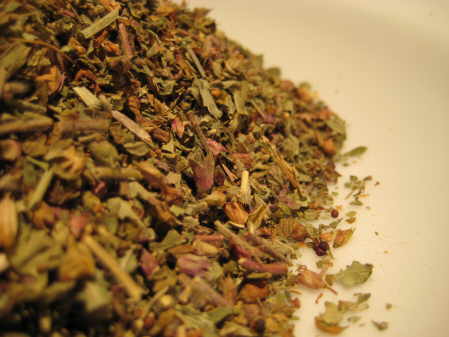 Germander (Teucrium chamaedrys) is native to many parts of Europe, the Greek Islands, and Syria. The name is believed to be a corruption of chamaedrys, which comes from the Greek chamai meaning ground, and drus meaning oak. The leaves do look a little like oak leaves.

The plant is a complete Bee magnet, whatever else is in bloom at the time, if Germander is flowering it will attract all the bees.

It has an ancient reputation as a cure for gout. The Holy Roman Emperor, Charles V, is said to have been cured of gout with this remedy. He took a decoction of Germander Herb for sixty days.

Its garlic-like aroma makes it useful in herb wreaths to freshen a room. Medicinally it has been used as an infusion in the treatment of gout as mentioned but in the past it was used as a tonic for intermittent fevers and recommended for uterine obstructions. Possessing qualities similar to horehound, an infusion with honey was used for asthmatic conditions and coughs.

Culpeper said of Germander that it is:

‘most effectual against the poison of all serpents, being drunk in wine and the bruised herb outwardly applied…. Used with honey it cleanseth ulcers and made into an oil and the eyes anointed therewith, taketh away dimness and moisture. It is also good for pains in the side and cramp…. The decoction taken for four days driveth away and cureth tertian and quartan agues. It is also good against diseases of the brain, as continual headache, falling sickness, melancholy, drowsiness and dulness of spirits, convulsions and palsies.’