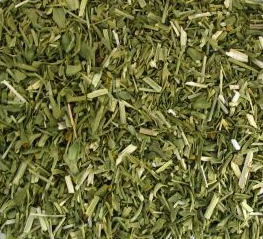 Rue Herb (Ruta graveolens) is a hardy, evergreen, somewhat shrubby plant and a native of Southern Europe. The stem is woody in the lower part, the leaves are alternate, bluish-green, bi- or tripinnate, emit a powerful, disagreeable odour and have an exceedingly bitter, acrid and nauseous taste.

The greenish-yellow flowers are in terminal panicles, blossoming from June to September. In England Rue is one of our oldest garden plants, cultivated for its use medicinally, having, together with other herbs, been introduced by the Romans, but it is not found in a wild state except rarely on the hills of Lancashire and Yorkshire. This wild form is even more vehement in smell than the garden Rue. The whole plant has a disagreeable and powerful odour. The first flower that opens has usually ten stamens, the others eight only.

Strongly stimulating and antispasmodic – often employed, in form of a warm infusion, as an emmenagogue. In excessive doses, it is an acro-narcotic poison, and on account of its emetic tendencies should not be administered immediately after eating.

It forms a useful medicine in hysterical affections, in coughs, croupy affections, colic and flatulence, being a mild stomachic. The oil from the herb may be given on sugar, or in hot water.

Externally, Rue Herb is an active irritant, being employed as a rubefacient. If bruised and applied, the leaves will ease the severe pain of sciatica. The expressed juice, in small quantities, was a noted remedy for nervous nightmare, and the fresh leaves applied to the temples are said to relieve headache. Compresses saturated with a strong decoction of the plant, when applied to the chest, have been used beneficially for chronic bronchitis.

If a leaf or two is chewed, a refreshing aromatic flavour will pervade the mouth and any nervous headache, giddiness, hysterical spasm, or palpitation will be quickly relieved.