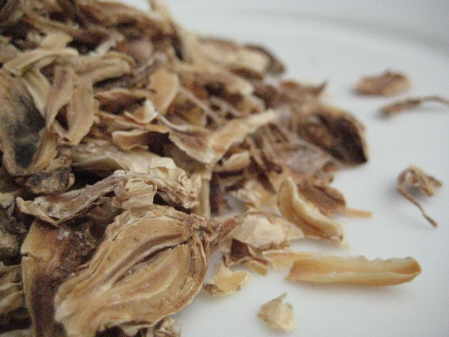 Squills is a bulb is similar to that of an onion-like plant, of which a syrup is made and mostly used as a relief for coughs and congestion.

Based on traditional use Squills are most employed as a cough-medicine (expectorant): rather less loosening than ipecac, and therefore suited to a later stage in a bronchial attack. The dose is from a half tea-spoonful to a teaspoonful three times a day.

Scilla, the classical name of the plant, is derived from a Greek word meaning to excite or disturb, as an emetic does the stomach. Scilla maritima was the name given by Linnaeus, but this was changed to Urginea, in allusion to the Algerian tribe Ben Urgin, near Boma, where Steinheil, in 1834, examined this plant, removing it from the genus Scilla. The main difference between the genera is that the genus Urginea has flat, discoid seeds, while in Scilla proper they are triquetrous (threeangled, with three concave faces). Baker named it Urginea maritima, but it now retains Scilla as its specific name.

It was used in early classical times and Oxymel of Squill, used for coughs, was invented by Pythagoras, who lived in the sixth century before Christ.

It is mentioned by Theophrastus in the third century before Christ, and was known to all the ancient Greek physicians. Epimenides, a Greek, is said to have made much use of it.

It is considered to be the Sea Onion referred to by Homer. Pliny was acquainted with it, and Dioscorides, who lived about the same time, describes the different varieties of the bulb and the method of making vinegar of Squills. A similar preparation, as well as compounds of Squills with honey, was administered by the Arabian physicians of the Middle Ages, who introduced the drug into European medicine.