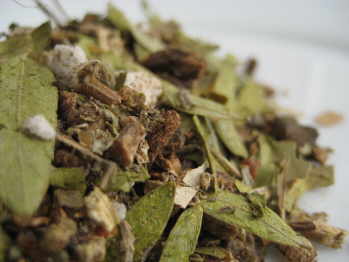 Swedish Bitters is a famous blend of herbs based on an ancient recipe for a traditional herbal tonic created by Paracelsus in the 15th Century. It was rediscovered by a Swedish doctor in the 18th Century and has been in common use ever since, specifically as a digestif.

It was made up from as many as 80 or so different herbs and now lost ingredients including some of which nothing is now known.

The formula was believed to purify the blood, act as a nervine stimulant, for some reason, to speed up the healing of wounds and perhaps its best known attribute of soothing the digestive tract.

Theriac or Venetian Treacle were ingredients in ancient Bitters and they, in themselves, contain tens of different ingredients such as snake venom (hardly an ingredient utilised today!)

For more information regarding Theriac this is a useful Wiki article.

This version of Swedish Bitters is far more simple but no less effective and, naturally, contains no snake venom or animal parts in its use of ingredients:-

The blend smells divine, tastes a little less so but is  wonderful in its aroma and efficacy.

Some people will make a tea from this blend but many will make a homemade tincture by steeping the herbal mix in vodka for around 10 days, in a sterile container, agitating a few times whilst it is steeping and finally straining the mixture and diluting with distilled water about 50/50 in our view.