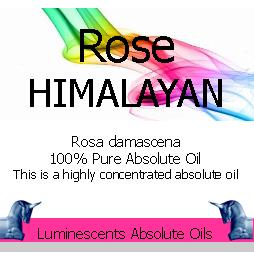 SCENT: Rose Himalayan is a very complex, sweet floral scent. Its reputation of being a must ingredient in perfumes is well deserved. It has  a slightly less honeyed depth to it compared to other rose oils due to its high altitude growing conditions

The Damask Rose (or Damascene Rose if you prefer) from which this Rose Damask Absolute Oil known as Rose Himalayan is obtained is one of the worlds best known flowers – stunning and exotic in both visual appearance and aroma. It is the Damascene Rose that is utilised but this oil is made from Roses only grown at high altitude in Nepal where the growing conditions and climate differ completely from other locations where the Damascene Rose is grown. It is considered to be a fine Rose oil, somewhat lighter in scent than others with slightly less honeyed depth to it and a golden hue.

Rose Himalayan is a very common Absolute oil in the perfume and aromatic industry. Aromatherapists also credit it with being an exotic aphrodisiac, as an emollient in skin care products, and as a balancer of the spirit.