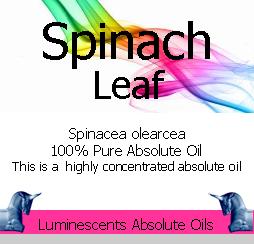 SCENT: Spinach Leaf has a very pleasant, fresh scent that has both fruity and nutty tones.

Spinacea oleracea, from which Spinach Leaf Absolute oil is extracted, is a native of Asia, and was brought to Europe by travellers and merchants in the 15th Century. It has a long history of being appreciated for it’s tasty and aromatic leaves which are iron rich but the absolute oil made from the leaves has a great many applications within the perfumery industry.

Spinach Absolute Oil is an unusual but well known perfume ingredient in high end perfumes but the plant and the oil is well respected as being a diuretic, cooling agent, laxative, demulcent, and as an astringent. It is also well fortified in Vitamins A, B, C, and D. For this reason it is becoming increasingly popular in the health food industry. Raw spinach is also being used as a natural green colorant for soaps and candles.

Spinach absolute is typically used independently of other essential oils, though in powder form it is often used in combination with other herbs. The Absolute oil does work well with Citrus oils and woody oils, like Fir and Cedar.

Since arriving in Europe in the 15th Century from Asia, Spinach has become a popular vegetable. In North America it received a boost when it’s nutritional benefits were trumpeted by none other than “Popeye” – the Sailorman of course. It is a good natural source of iron although my nutrionist tells me that Watercress is even better.