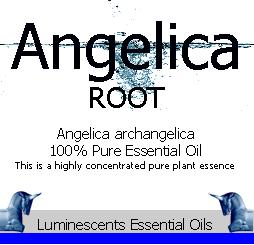 COLOUR:Pale yellow to orange brown as it ages

CAUTIONS: Use well diluted as it is phototoxic and therefore to be avoided in sunlight and as with all essential oils, they should not be used during pregnancy and never ingested (taken internally) and should be kept away from children and pets. No medicinal claims are made for this product and the notes above are provided for guidance purposes only. Essential Oils are powerful plant extracts and should be used with extreme caution. You should seek the advice of a qualified practitioner should you be in any doubt.

Angelica is a large hairy, biennial plant with ferny leaves and umbels of white flowers it can grow 5 to 10 feet tall. Flowering time is June to August and the plant can be found all over the Northern Hemisphere, as far north as Greenland. There are up to 60 different species all of which have a slightly different scent profile but it is The Garden Angelica ( This product – Angelica archangelica) that is used medicinally and to obtain the oil.

Useful for dull and congested skin, accumulation of toxins in joints, arthritis, gout, water retention, Bronchitis, coughs, fatigue, migraine, nervous tension and stress related disorders. It has no known aromatherapy uses. It contains furocoumarins which is a substance that will make the skin very sensitive to light.

History of The Plant:-

Angelica Archangelica, is a tall plant widely cultivated now in Belgium, Holland, France, Germany, Hungary and India. It grows wild in poor soils conditions elsewhere mainly.This plant is often used to flavour many alcoholic drinks and its candied stem has long been used in confectionery. It is a known constituent of of the liqueurs, Cointreau and Chartreuse and has, in the past, been used to flavour gin and what with the resurgence of artisan spirits, it is now making a comeback in this area.