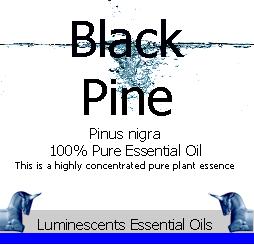 The Corsican Black Pine from which this Black Pine Essential oil is distilled, is taller than its cousin, the Scotch Pine. It reaches up to 160 feet or more and is very long lived.  Longer than half a millenium by some estimates.

It is a mountainous Pine that grows rapidly across the southern Mediterranean and throughout Europe. It grows from Spain to the eastern Mediterranean; on the Anatolian peninsula of Turkey and on Corsica/Cyprus, including the Crimea. It also grows in the high mountains of the Maghreb.

Black Pine is analgesic, antibacterial, antifungal, antiseptic, antiviral, and anti-inflammatory. It is primarily used to deodorise, cleanse, disinfect and to freshen. It is  used with respiratory and circulatory disorders when vapourised,  It is used for muscle and tissue damage when used in massage.