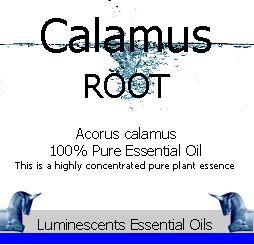 COLOUR: Calamus Root essential oil has a pale yellow hue which can darken with age

The Cree Indians of Northern Alberta use Acorus calamus Root from which this Calamus Root Essential Oil is distilled for a number of medicinal purposes which include as an analgesic for the relief of toothache or headache, for oral hygiene to cleanse and disinfect the teeth, the fight the effects of exhaustion or fatigue, and to help cure/prevent a hangover.

Calamus Root essential oil is traditionally used, and still so today, to stimulate the nervous system, helping with headaches and neuralgia, panic attacks, improving memory and reducing swelling in joints and is considered a pain reliever.

Calamus Root has been used in Asia for at least the last 2000 years for any number of beneficial reasons. The ancient Chinese used it to lessen swelling and for constipation. It promoties peristalsis ( the muscular movement of the intestines for digestive transit)

In India, Ayurvedic medicinal practitioners have used the root to treat fevers, and for asthma and bronchitis, as well as an all around sedative.

The root was also used by the ancient Greeks to whom it was well known and it is included in the traditional remedies of many other European cultures.