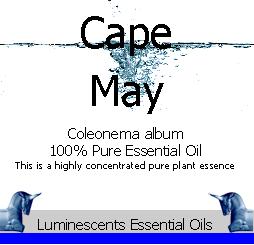 COLOUR: Cape May Essential Oil is pale green in hue

Coleonema album from which Cape May Essential Oil is distilled is a woody shrub with small leaves and quite fragrant flowers. Its natural habitat is the southern coastal region of South Africa hence the “Cape” in its name but is also known in some parts as Wild Buchu although it has nothing to do with Buchu itself which is an Agosthoma.

Traditional Uses and Constituents for Cape May Essential Oil:-

The main chemical constituents of the essential oil are Myrcene, phellandrene, pinene, ocimene, and germacrene-D. It is used as a disinfectant and insect repellent. It is used as a fragrant bath time fragrance.

History of Cape May Essential Oil:-

Cape May is used by the Hottentot and Sotho tribes, and fishermen use it to remove the smell of fish and bait from their hands.