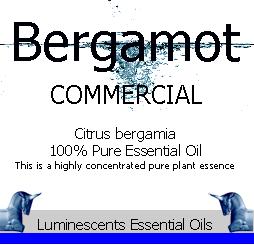 SKU: LU1015. Categories: All Oils Beginning with B, Essential Oils.

This Bergamot Commercial Essntial Oil is a mass produced oil and as such its therapeutic qualities may vary although its fragrance is as strong and pungent as the more expensive pressings.

Bergamot Commercial trees can grow up to four metres high, with star-shaped flowers, and smooth leaves, bearing citrus fruit resembling a cross between an orange and a grapefruit but in a pear-shape. The fruit ripens from green to yellow. Bergamot is commercially used as a flavouring for Earl Grey tea and marmalade and in many cosmetics. This cheering and uplifting essential oil is ideal to use at the start of your day or during what feels like a particularly long day!

The name Bergamot is derived from the city Bergamo in Lombardy where the oil was first sold. This tree is native to South East Asia but was introduced to Europe, and particularly Italy, but is also found in the Ivory Coast, Morocco, Tunisia and Algeria.

There are other Bergamots:-

Bergamot Sicilian (Made only from fruit grown in Sicily)