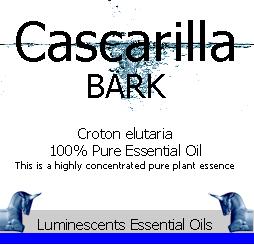 SCENT: Cascarilla Bark  essential oil has a spicy peppery, aroma with a hint of cinnamon

The shrub is native to the Caribbean. It has now been naturalised in many other tropical regions of Central and South America and grows to be a smallish tree or perhaps better described as a small shrub rarely getting above 20 feet or so. It has an essential oil which is obtained from the bark which is also called Croton.

The essential oil is used in high end aromatic oriental style men’s designated perfumes and is also used as a flavouring.