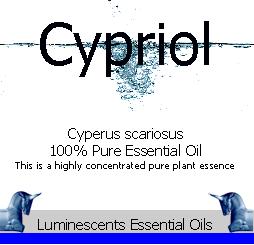 SCENT: Cypriol essential oil has a surprisingly vibrant scent that is very similar in tone to oils from the Cedarwood family.

Cypriol is produced from a very invasive pestilent small tufted grass like plant, and as such can be found in all tropical, subtropical and temperate regions of the world. In India, it is common in open, disturbed habitats to an elevation of about 1800 metres.  It produces delicate, aromatic flowers.

Cyperus scarious is quite a delicate, slender small herb with deep brown and intensly aromatic tubers. Its ia also known as Nutgrass or Umbrella Sedge and by its Hindi name Nagarmotha.

Cypriol is often used in compounding perfumes, in the manufacturing of soaps, medicine and incense sticks. It is also used as an insect repellent.  Its principal compound is cyperene. Other constituent compounds are alpha-copaene and caryophyllene oxide

Cyperus scariosus has a long history, particularly in India where the oil was, and still is to some extent, used to scent clothing and for use as medicine against digestive problems. It is used a great deal in Ayurvedic preparations. In India, the tubers are credited with astringent, diaphoretic, diuretic, desiccant, cordial and stomachic properties. A decoction of the tuber is used for washing hair. It makes a remarkably good insect repellant