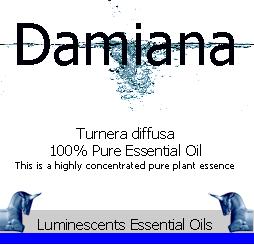 Turnera diffusa from which Damiana Essential Oil is distilled, is a shrub native to Central and South America. It belongs to the family Turneraceae. Blooming with small yellow flowers, the shrub has an odour somewhat like chamomile and the leaves have traditionally been made into a tea which was used by native people of Central and South America for its reputed aphrodisiac effects. It actually smells very much nicer than Chamomile if you ask me!

Considered by aromatherapists to be an aphrodisiac.

Damiana is an ingredient in a traditional Mexican Liqueur which has been used instead of triple sec in margaritas Pundits quote Mexican folklore claiming that it was used in the the very first margarita. Damiana margarita is popular in the whole of Mexico. It was included in many patent medicines such as Pemberton’s French Wine Coca but the leaves were left out of the non alcoholic counterpart of this which we now know as Coca Cola.

It has a long folklore history of improving sexual dysfunction, especially in South America and the Caribbean which is presumably where it gets its aphrodisiacal connotations and why it is sometimes referred to as Damiana aphrodisiaca.