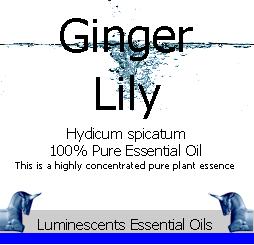 SCENT: Ginger Lily is a blend of warm woody notes with a soft hint of spice, and a touch of soft floral.

Hydicum spicatum, from which Ginger Lily essential oil is distilled, grows to up to 3 feet tall and the leaves are around 16 inches long by 4 inches wide. 8 inch long loose terminal flower spikes have individual flowers that are white or sometimes yellow with reddish stamens.It is now grown as an ornamental plant in Europe and North America for its fabulous flowers. It is a perennial but the roots need care during the cold winter months with a mulch covering and well drained soil. It hates sitting in the wet.

It is also called the Hydacheium but it should not be confused with Ginger itself. In Hawaii where it is an extremely popular flower it is called Awa-Puhi. It is a statement flower inasmuch as it is glorious and brash and just a touch overwhelming.

It is a carminative, stimulant, tonic, anti-inflammatory, antibiotic, anti asthmatic. The essential oil is used in perfumery but also has antibiotic properties and there is increased interest in the medicinal properties of the entire species.

Traditionally, an extraction of the root is used in Ayurdevic medicine as an anti-nausea agent. Research indicates that the oil has a slightly tranquilizing action, as well.