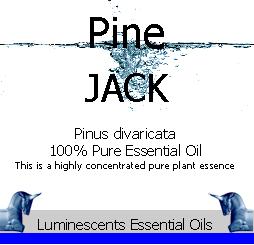 Pinus banksiana divaricata from which this Jack Pine Essential oil is distilled is a medium sized, rather untidy pine, native to the northern parts of the United States of America and all of Canada. It is also called Grey Pine or Scrub Pine. It is a rare oil and the tree is considered threatened in much of its natural habitat.

In the far west of its natural habitat,it easily hybridises with it close relative, the Lodgepole Pine (Pinus contorta). The species is named after Sir Joseph Banks, The English botanist.

Jack Pine is analgesic, antibacterial, antifungal, antiseptic, antiviral, and anti-inflammatory. It is primarily used to deodorise, cleanse, disinfect and to freshen. It is  used with respiratory and circulatory disorders when vapourised and for muscle and tissue damage when used in massage.