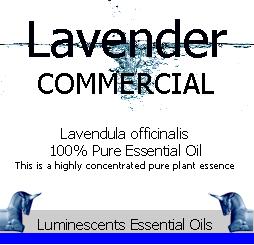 Lavender Commercial grows to about 1 metre in height and produces long thin purple- blue flowers. The entire plant is covered with oil glands, which are in the star shaped hairs that cover the plant. Lavender Commercial has the most floral scent of all the Lavenders, though its therapeutic levels are the lowest. For that reason it is often the preferred Lavender for soaps and candles over the hybrid Lavandins which tend to be more resinous in aroma due to the high level of turpenes they contain.