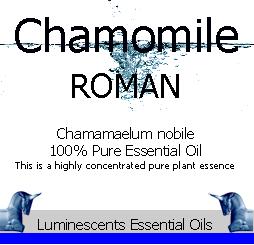 SCENT: Roman Chamomile essential oil has a sweet, fresh & spicy and is often decribes as having apple and fresh cut hay tones.

Roman Chamomile is a low growing perennial that rarely exceeds a height of around 9 inches. The plant is extensively grown in central and Eastern Europe. The leaves are lacy and finely divided, on stems capped with small, white daisy like flowers.

The relaxing aroma of this essential oil, sometimes described as like ‘apples and straw’ is an exotic and rich scent. It is commonly accepted as the best smelling of the three Chamomiles.

Mostly known for its skin attributes, aroma and calming properties.