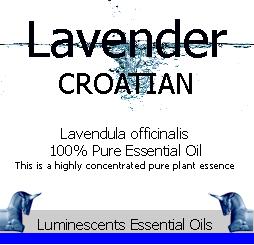 Lavender Croatian Essential Oil is distilled from the Lavendula officinalis species of Lavender (sometimes called Pot or Apothecary’s Lavender) which is an evergreen woody shrub, up to 1 metre tall, with pale green, narrow linear leaves and violet blue flowers.