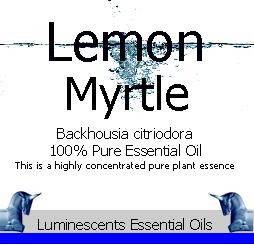 Lemon Myrtle (Backhousia citriodora) is a fairly common tree typically growing throughout Australia. It is also known in Australia as Lemon Scented Ironwood and has long been used by the indiginous Aboriginal people of Australia as both a food flavouring and for its medicinal qualities.

Not formally documented in readily available publications, though there is evidence that it is an effective germicide. It is anti Microbial and also considered to have a “cleaner and sweeter” aroma than either Lemongrass or May Chang.

An extremely potent antibacterial and germicide, Lemon Scented Myrtle is reputed to be a much more effective germ killer than the more familiar Tea Tree.

Lemon myrtle is one of the well known bush food flavours and is sometimes referred to as the “Queen of the lemon herbs”.

The leaf is often used as dried flakes rather like Lemon Verbena leaf is used. It is used to flavour biscuits and pasta, as a stuffing ingredient , baked fish or simply made into a refreshing beverage. There are now some Ice Creams flavoured with it and other dairy foods because unlike lemon itself, it doesn’t curdle the fat in dairy. and is seen by many to have a stronger and more true flavour.