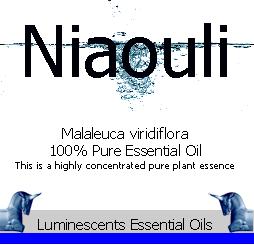 Malaleuca viridiflora from which Niaouli essential oil is distilled is an evergreen tree with pointed leaves and spiky long yellow flowers. The leaves of the evergreen are extremely fragrant when crushed. Niaouli can be found in New Caledonia and Australia. It is also known as the Broad Leafed Paperbark

It is sought after for its antiseptic, clearing and cleansing properties and as a physical and mental stimulant. It is also used for its decongestant, insecticidal and stimulant properties. In todays society it is used during radiology treatments on the skin to prevent burning during radiation treatments. Niaouli is used often with cancer patients because of its effect as a stimulant for the circulation as it increases the growth of white blood cells. It can be used to alleviate the pain of muscle tension. It is also good for intestinal infections along with urinary infections.

Niaouli has a long history of use by many different cultures. In New Caledonia the fresh air and absence of malaria is credited solely to the indiginous niaouli tree which grows all over the islands. It is also used in to purify their water supply.

Niaouli essential oil did not appear in Europe until the 17th century. Captain Cook gave it the botanical name while on route from Australia, though the French still sometimes refer to it as Gomenol.