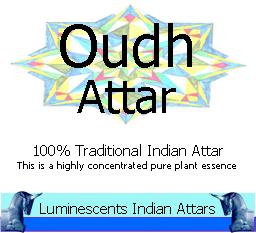 SCENT: Oudh Attar has an oriental-woody and very soft fruity-floral aroma characterized by a sweet-balsamic note and hints of vanilla, musk and amber

Oudh Attar has an oriental-woody and very soft fruity-floral aroma characterized by a sweet-balsamic note and hints of vanilla, musk and amber. Its principal aromatic ingredients are Aquilaria malaccensis from which Agarwood or Aloes wood essential oil is obtained and Sandalwood (Santalum album)

Attars, and Oudh Attar in particular, by their very nature are expensive – why? The ingredients used are some of the most expensive in the world.

This Oudh Attar lasted three days on me and I shower at least once every day! The Ambar lasted just a day.

Oudh, Agarwood or Aloeswood (Aquilaria malaccensis), from which the essential oil is obtained, is a highly fragrant, much prized and valued, resinous wood used in incense and particularly in perfume. It is formed in the heartwood of aquilaria trees when they become infected with a type of mould as a result of penetration by a wood and oily resin feeding insect.

Because of its rarity and expense, is one of the most graded ( and adulterated ) products in the world – Its highest grade is thousands of pounds per kilo and is generally made from wood that has been naturally affected by the Ambrosia Beetle. Artificial infection reduces the price somewhat and is obtained through managed plantations of the trees – some would say that this affects the overall and final product’s aroma. In either case it is the latter which the industry tends to use because the cost is so much less and almost all the oil sold in world markets is from this source, as indeed this oil is.

The insect belongs to the family of the Ambrosia beetle named Dinoplatypus Chevrolati.  After penetration a life-long infection can occur, and in response, the tree produces a self defense material or resin to control and seal the damage caused. While the unaffected wood of the tree is relatively light in colour, the resin dramatically increases the mass and density of the affected wood, changing its colour from a pale beige to yellow, orange, red, dark brown or black.

Prior to this infection, the heartwood is odourless, relatively light and pale coloured; however, as the infection progresses, the tree produces a dark and very aromatic resin which is called aloes or agar (as well as gaharu, jinko, oud, or oudh), in response to the attack, which results in a very dense, dark, resin embedded heartwood.

There are seventeen species in the genus Aquilaria which are large evergreen trees native to southeast Asia. Nine of them  are known to produce agar wood. In theory agarwood can be produced from all members; however, until recently it was primarily produced from Aquilaria malaccensis (this product) . A. agallocha and A. secundaria are synonyms for A. malaccensis

A. crassna and A. sinensis are the other two members of the genus that are usually harvested.

The principal reason for the rarity and high cost of agarwood is the depletion of the wild resource. Since 1995 Aquilaria malaccensis, the primary source, has been listed in Appendix II (potentially threatened species) by the Convention on International Trade in Endangered Species of Wild Fauna and Flora (CITES) In 2004 all Aquilaria species were listed in Appendix II; however, a number of countries have outstanding reservations regarding that listing.

First-grade agarwood is one of the most expensive natural raw materials in the world with 2010 prices for superior pure material as high as US$100,000/kg, although in practice adulteration of the wood and oil is common, allowing for prices as low as US$100/kg. A whole range of qualities and products are on the market, varying in quality with geographical location, botanical species, the age of the specific tree, cultural deposition and the section of the tree where the piece of agarwood stems from.

Oudh oil is distilled from agarwood, and fetches high prices depending on the oil’s purity. The current global market for agarwood is estimated to be in the range of US$6 – 8 billion and is growing rapidly