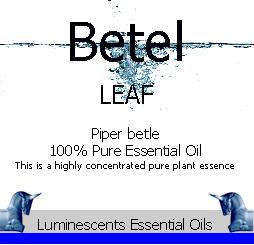 SCENT: Betel essential oil has a distinctly phenolic smoky note, almost tar-like. A compound tentatively identified as chevibetol is believed to have the greatest impact on the characteristic smoky aroma of betel leaf.

The Betel from which Betel Leaf Essential Oil is derived is a twining vine which is part of the pepper family, whose leaves yield an aromatic essential oil rich in powerfully antiseptic phenols. The leaves are also rich in starch, sugars and tannins. The cultivation of this creeper needs a lot of care and attention. Dryness and exposure to the sun for too long a period can harm and plant. The heart-shaped leaves have distinct pleasant aroma and are commonly chewed alone or with other plant materials.

The essential oil has no known western aromatherapy associations.

The plant itself is credited as being stimulating, carminative, aromatic, warming, antiseptic and even usedas an aphrodisiac. It has several applications among the native population, being especially used to harden the gums, preserve the teeth, and sweeten the breath. It is said to improve the voice.

The Betal Leaf plant grows widely over the entire area between South Arabia and Southeast China. According to The Encyclopedia Britannica; betel leaf is chewed habitually by some 10 percent of the world’s population, almost entirely in southern Asia and the Pacific.

In India and parts of Southeast Asia, the leaves are chewed together with mineral lime (calcium oxide) and the areca nut which, by association, is sometimes inaccurately called the “betel nut”. The lime acts to keep the active ingredient in its freebase or alkaline form, thus enabling it to enter the bloodstream via sublingual absorption. The areca nut contains the alkaloid arecoline, which promotes salivation (the saliva is stained red), and is itself a stimulant. This combination, known as a “betel quid”, has been used for several thousand years. Tobacco is sometimes added.

In India, they use betel to cast out (cure) worms.

In India, the betel and areca play an important role in Indian culture especially among Hindus. All the traditional ceremonies governing the lives of Hindus use betel and areca. For example to pay money to the priest, they keep money in the betel leaves and place it beside the priest.

The betel and areca also play an important role in Vietnamese culture. In Vietnamese there is a saying that “the betel begins the conversation”, referring to the practice of people chewing betel in formal occasions or “to break the ice” in awkward situational conversations. The betel leaves and areca nuts are used ceremonially in traditional Vietnamese weddings. Based on a folk tale about the origins of these plants, the groom traditionally offers the bride’s parents betel leaves and areca nuts (among other things) in exchange for the bride. The betel and areca are such important symbols of love and marriage that in Vietnamese the phrase “matters of betel and areca” (chuy?n tr?u cau) is synonymous with marriage.

A related plant P. sarmentosum, which is used in cooking, is sometimes called “wild betel leaf”.