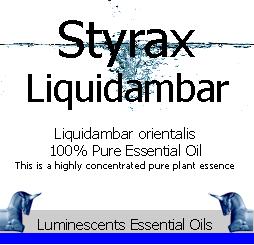 Styrax Liquidambar Essential Oil  is also and commonly known as Oriental Sweetgum or Turkish Sweetgum and  is a deciduous tree in the Liquidambar genus. It is a native of the eastern Mediterranean mainly in the southwestern area of Turkey and on the Greek island of Rhodes.

In English the oil is known by a variety of names such as Storax, Levantine Styrax, Asiatic Storax, Balsam Storax, Liquid Storax, Oriental Sweetgum Oil, or Turkish Sweetgum Oil.

The oil is made by distillation of the gum produced by the trees when damaged. This is done deliberately in cultivation and is a lengthy process taking many months. It is not at all dissimilar to the fashion in which farmed or cultivated frankincense is obtained

The essential oil treating minor abrasions and cuts, bronchitis and catarrh and minor coughs. It is reputed to be an effective treatment against scabies and ringworm but this is largely a traditional or the result of folkore rather than any clinical testing which has been undertaken. Emotional and spiritual uses are for treatment for anxiety and stress.