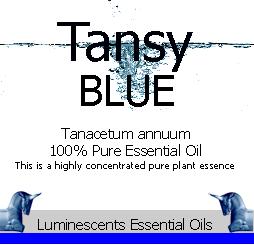 SCENT: Tansy Blue essential oil has a surprisingly sweet scent and is used occasionally in applications for skin care products and skin therapies despite its toxicity.

This oil has no use in aromatherapy despite many claims from dubious sources to the contrary but is used occasionally in skin care preparations.

The Tansy is toxic. Blue Tansy  like all of the blue essential oils containing the active azulene  is best known for its skin care properties as an anti-inflammatory. It has also been credited by aromatherapists as being an antihistamine and antispasmodic. It is believed by some to induce relaxation, reduce nervous tension and stress, and be beneficial for allergies.

Most oils but specifically Ravensara but take care of discolouration issues as the oil may very well produce an unusal colour when mixed in a cream base for instance.

All Tansy species are toxic and should not be taken internally unless medically supervised ( although its primary use in the past was internal) and used with extreme caution in external application.