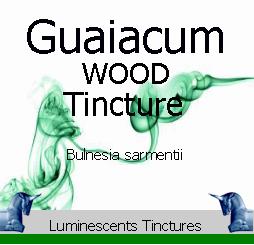 Guaiacum Wood Tincture (Bulnesia sarmentii) also known as Lignum Vitae is obtained from an incredibly slow growing tree, varying in height from 15 to 50 feet. The trunk is usually crooked, with crowded, knobby, short-jointed, flexuose, spreading branches, about 4 feet in diameter; the bark is furrowed, spotted, and greyish.

It grows naturally in the West Indies, especially Jamaica, St. Thomas and St. Domingo and the Central Americas but is often grown as an ornamental in California and some adjacent states of the USA.