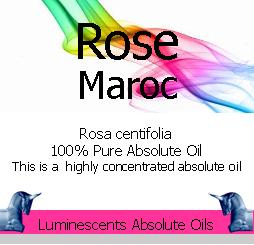 SCENT: Rose Maroc is a very complex, sweet floral scent. Its reputation of being a must ingredient in perfumes is well deserved.

The Centifolia Rose from which the Rose Maroc Absolute Oil is obtained is one of the worlds best known flowers – stunning and exotic in both visual appearance and aroma.

Rose is a very common oil in the perfume and aromatic industry. Aromatherapists also credit it with being an exotic aphrodisiac, as an emollient in skin care products, and as a balancer of the spirit.