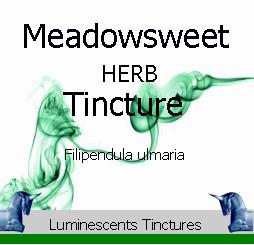 It is a mild laxative.

Filipendula ulmaria, from which this Meadowsweet Tincture is derived, is also known as Queen of the Meadow, Pride of the Meadow, Meadow-Wort, Meadwort, and Bridewort and is a perennial herb in the family Rosaceae, which grows in damp meadows. It is native throughout most of Europe and Western Asia although it has been successfully introduced and naturalized in North America.

Tincture from the whole herb possesses a pleasant taste and flavour, the green parts having a similar aromatic character to the flowers, leading to the use of the plant to strew on floors to give the rooms a pleasant aroma, and its use to flavour wine, beer and many vinegars which the tincture makes readily available.

Meadowsweet was regarded as sacred by the Druids. It has many medicinal properties. The whole plant is a traditional remedy for an acidic stomach and the fresh root is often used in homeopathic preparations. It is effective on its own the treatment of diarrhoea. The flowers, when made into a tea, are a comfort to flu victims. Dried, the flowers make a lovely potpourris.

In 1897 Felix Hoffmann created a synthetically altered version of salicin, derived from the species, which caused less digestive upset than pure salicylic acid. The new drug, formally Acetylsalicylic acid, was named aspirin by Hoffman’s employer Bayer AG after the old botannical name for Meadowsweet, Spirea ulmaria. This gave rise to the hugely important class of drugs known as NonSteroidal AntiInflammatory Drugs, or NSAIDs.

White-flowered Meadowsweet has been found with the cremated remains of three people and at least one animal in a Bronze Age cairn at Fan Foel, Carmarthenshire.