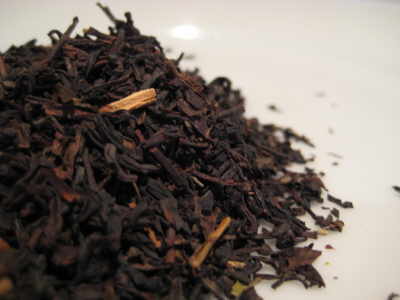 This Russian Caravan tea is a blend of Keemun, Oolong and Darjeeling teas carefully blended to produce a light liquoring tea described as a distinctive black tea with a slightly malty campfire smoky aroma and taste. Some blends use Lapsang Souchong to provide the smokiness to the the blend. Its traditional and it works well but makes the final blend much smokier. The whole point of Russian Caravan is that it is a delicately smoked tea. Some blends use Yunnan tea with the Keemun to provide a coppery liquor.

Although it is a Chinese originated tea its name originates from the 18th century Camel Caravans that transported the tea across the continent from tea-producing areas in India, Ceylon (now Sri Lanks) and China to Europe via Russia. It could take as long a six months to make the trip from China through Russia – its over six thousand miles – and the voyage was through some of the toughest and harshest of landscapes.

Cheaper transportation routes were considered but were responsible for making the taste of the tea suffer as they went to Odessa via passage through tropical climes, the heat and humidity of which made the tea degrade whereas the colder, drier climate of passage through Mongolia and Siberia improved the tea.

It is anecdotal that the tea took on its smoky flavour from the caravan campfires as it made its journey though Mongolia and Siberia but actually its quite unlikely.