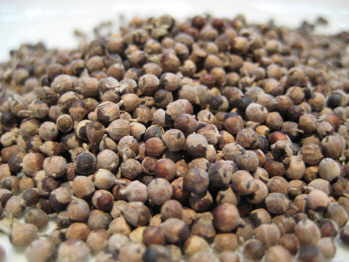 Agnus Castus Berries (Vitex agnus castus), sometimes referred to only as ‘Vitex’ is a member of the Verbena family. It is most commonly found all over the Meditteranean where it thrives in the warm climate. In the UK it is likely to be found growing in the warmer southern parts, though it is not at all common. It flowers late in the UK and as a consequence the seeds will not develop fully.

The name ‘Agnus Castus’ derives from the Greek for ‘chaste’ which is why it is sometimes known as Chaste Berry. According to Pliny, writing in the first century, Greek women wishing to preserve their chastity placed leaves of this plant on their beds and slept on them. Pliny’s contemporary, Dioscorides, claimed that the characteristics of Agnus Castus preserved chastity because it smells so bad that, when strewn on the bed, it was enough to deter amorous advances from men! Agnus Castus was certainly used widely by the ancient herbalists for menopause and hormone balancing. Dioscorides even concurs with its current uses; “it both brings down the milk and expels the menstrua”.

Vitex agnus castus is mainly known as a remedy used by women for hormone imbalance and menopause.

Do not take vitex agnus castus during pregnancy; and it would be wise to avoid it when taking any other product or drug which affects the female hormone system – such as HRT or the contraceptive pill. The characteristics of agnus castus are so benign that reports of negative reactions are few. About one in 50 people may experience mild indigestion, or a mild skin rash. If this happens, stop taking the herb for a few days then slowly re-introduce it.