AMBERGRIS – What is it? – you’d be surprised 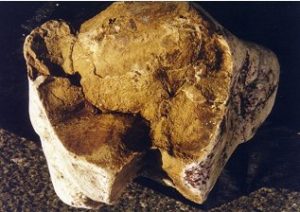 We’ve noticed so many people searching for Ambergris essential oil on our website and as no such thing exists (although there are very good extracts and synthetics) it occurred to us to explain exactly what it is and why it is now almost entirely a synthetically made material used in perfumery as a fixative ( a substance that makes the perfume long lasting and “fixes” it ) as, with the exception of a few countries, it is largely illegal to trade in natural Ambergris.

Firstly it is not a plant. It is a gastric bi product from the Sperm whale (an endangered and vulnerable species) which eats giant squid and as large numbers of squid beaks have been found in natural ambergris it has been suggested that the beaks irritate the Sperm whale’s stomach and are too sharp to pass easily through its digestive tract (as the beaks cannot be digested ) and the resultant production of ambergris lessens the irritation as it coats the beaks, making it easier in digestive transit. Larger ambergris deposits are suggested to be from whale vomit.

It takes years for ambergris used in perfume to form. The main odorous constituents in ambergris are ambrox and ambrinol.

Christopher Kemp, the author of Floating Gold: A Natural (and Unnatural) History of Ambergris, says, “It is only produced by sperm whales, and only by an estimated one percent of them. Once expelled by a whale, it must float for years, then it must make landfall, avoid being broken into pieces by rough seas, and someone must find it. In other words, the odds of finding ambergris are extremely small.”

When first expelled ambergris is soft, whitish (occasionally with black or dark brown streaks in it) and smells strongly of faecal matter. It takes months and even years of photo degradation and oxidation in the seas for it to harden and darken, its eventual colour being dark grey or even black. Its texture is still waxy but also crusty at this stage and its smell has altered to an animalistic, sweet and earthy fragrance which is then processed to be used as a highly prized fixative in the perfume industry – or rather was in the past. Whilst there are still a few perfumes that exist using ambergris that is found either floating at sea or washed up on various beaches, since 1986 when the majority of nations banned whale hunting, the product has been also banned as exploitation of whale species by all but a few countries such as France and Switzerland.

The product has been valued for millennia. The Ancient Egyptians used to burn it as an incense and modern Egyptians still use it for scenting cigarettes. In medieval Europe it was considered to be an effective protection against the Black Death and for those that could afford it, it was carried around as a small ball, like a pomander. In those days disease was thought to be in the air as a miasma and the smell of ambergris was so strong that it effectively masked the smell of anything else in the vicinity. It was also more commonly used by apothecaries to combat epilepsy, head pains and even colds.

It has been used as a flavouring in food and been thought to be an aphrodisiac. The Chinese call it Dragon’s spittle fragrance.

So because of its rarity, its unlikely discovery in the seas of our world, the vulnerability of the species that produces it and our quite natural reluctance to return to the days of indiscriminate slaughter of the rich number of animal species so abundant but continuously threatened by mankind – we now, quite rightly, use a synthetically produced version of ambergris.