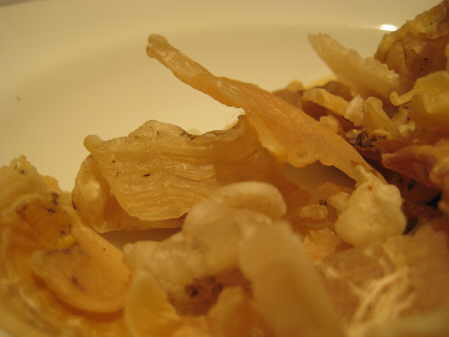 Gum Tragacanth is a viscous, odourless, tasteless, water-soluble mixture of polysaccharides obtained from the sap of several species of Middle Eastern Astragalus roots
The sap is drained from the root of the plant and dried. The gum seeps from the plant in twisted ribbons or flakes which can be but doesn’t have to be powdered. It absorbs water to become a gel, which can be stirred into a paste. The gum is used in veg-tanned leatherworking as an edge slicking and burnishing compound and is occasionally used as a stiffener in textiles.

Medicinal & Other Uses for Gum Tragacanth:-

It contains an alkaloid that has historically been used as a herbal remedy for such conditions as cough and diarrhoea. As a mucilage or paste it has been used as a topical treatment for burns. It is used in pharmaceuticals and foods as an emulsifier, thickener, stabilizer, and texturant additive (code E413).

Also, it is the traditional binder used in the making of artists’ pastels, as it does not adhere to itself the same way other gums (such as gum arabic) do when dry. Gum Tragacanth is also used to make a paste used in floral sugarcraft to create life-like flowers on wires used as decorations for cakes. It makes a paste which dries brittle in the air and can take colourings. It enables users to get a very fine, delicate finish to their work. Additionally, it has traditionally been used as an adhesive in the cigar rolling process used to secure the cap or flag leaf to the finished cigar body.

The Gum is less common in products than other gums, such as gum arabic or guar gum, largely because most Tragacanth is grown in Middle Eastern countries which have shaky and largely unstable trade relations with countries where the gum is used. Commercial cultivation of Tragacanth plants has generally not proved economically worthwhile in the West, since other gums can be used for similar purposes.

Gum Tragacanth is also used in incense making as a binder to hold all the powdered herbs together. Its water-solubility is ideal for ease of working and an even spread. Only half as much is needed, compared to gum arabic or something similar.