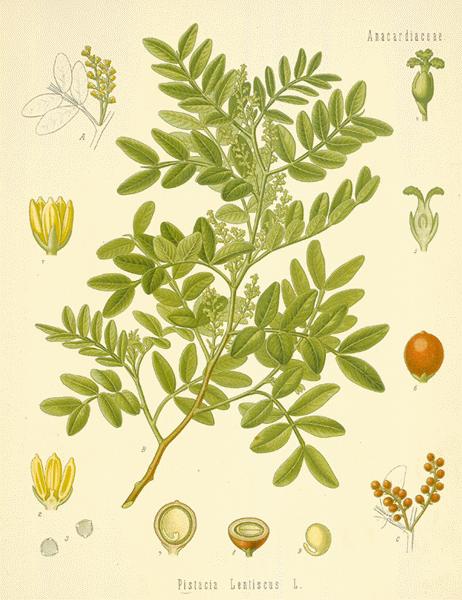 Mastic (Pistacia lentiscus) is an evergreen shrub or small tree of the Pistachio family growing up to 4 m (13 ft) tall which is cultivated for its aromatic resin, mainly on the Greek island of Chios. It is native throughout the Mediterranean region, from Morocco and Iberia in the west through southern France and Turkey to Syria and Israel and Palestine in the east. It is also native to the Canary Islands. The word mastic derives either from the Greek verb mastichein (to gnash the teeth, origin of the English word masticate) or massein (to chew)

For reasons that are not entirely understood, only the trees in the southern part of the island of Chios produce the distinctively flavoured resin. The island’s mastic production is controlled by a co-operative of medieval villages, collectively known as the ‘Mastichochoria’ (Μαστιχοχώρια), which are also located in the southern part of Chios.

Within the European Union, Mastic spice production in Chios is granted protected designation of origin and a protected geographical indication (PGI) name. Hence the price is sometimes a shock!

The aromatic, ivory coloured resin, sometimes referred to as Mastix, is harvested as a spice from the cultivated mastic trees grown in the south of the island where it is also known by the name Chios Tears.

Originally liquid, it is sun dried into drops of hard, brittle, translucent resin. When chewed, the resin softens and becomes a bright white and opaque gum.

The resin is collected by bleeding the trees from small cuts made in the bark of the main branches, and allowing the sap to drip onto the specially prepared ground below. The harvesting is done during the summer months between June and September. After the mastic is collected it is washed manually and spread in the sun to dry.

Mastic gum or resin is a relatively expensive kind of spice, that has been used, principally, as a chewing gum, for at least 2,500 years. The flavour can be described as a strong slightly smoky, resiny aroma and can be a bit of an acquired taste.

Some scholars identify the bakha בכא mentioned in the Bible – as in the Valley of Baca (Hebrew: עמק הבכא‎) of Psalm 84 – with the mastic plant. The word bakha appears to be derived from the Hebrew word for crying or weeping, and is thought to refer to the “tears” of resin secreted by the mastic plant, along with a sad weeping noise which occurs when the plant is walked on and branches are broken. The Valley of Baca is thought to be a valley near Jerusalem that was covered with low mastic shrubbery, much like some hillsides in northern Israel today. In an additional biblical reference, King David receives divine counsel to place himself opposite the Philistines coming up the Valley of Rephaim, southwest of Jerusalem, such that the sound of the “sound of walking on the tops of the bakha shrubs” (קול צעדה בראשי הבכאים) signals the moment to attack. (II Samuel V: 22-24)

Mastic is known to have been popular in Roman times when children chewed it, and in Medieval times it was highly prized for the Sultan’s harem both as a breath freshener and for cosmetics. It was the Sultan’s privilege to chew mastic, and it was considered to have healing properties. The spice’s use was widened when Chios became part of the Ottoman Empire, and it remains popular in North Africa and the Near East.

Mastic gum is principally used either as a flavouring or for its gum properties, as in mastic chewing gum.

As a spice, it continues to be used in Greece to flavour spirits and liquors (such as Chios’s native drinks of Mastichato & mastica chewing gum and a number of cakes, pastries, spoon sweets and desserts. Mastic resin is a key ingredient in Dondurma (Turkish ice cream), and Turkish puddings granting those confections its unusual texture and bright whiteness. In Lebanon and Egypt, the spice is used to flavour many sauces, ranging from soups to meats to desserts, while in Morocco smoke from the resin is used to flavour water. In Turkey, Mastic is used to flavour Turkish delight. Recently, a Mastic flavoured fizzy drink has also been launched.

As well as its culinary uses, Mastic continues to be used for its gum and medicinal properties. The resin is used as a primary ingredient in the production of cosmetics such as toothpaste, lotions for the hair and skin, and perfumes.

Mastic resin is also chewed as a gum to soothe the stomach. People in the Mediterranean region have used mastic as a medicine for gastrointestinal ailments for several thousand years. The first century Greek physician and botanist, Dioscorides, wrote about the medicinal properties of mastic in his classic treatise De Materia Medica (“About Medical Substances”). Some centuries later Markellos Empeirikos and Pavlos Eginitis also noticed the effect of mastic on the digestive system.

Apart from its medicinal properties, cosmetics and culinary uses, Mastic gum is also used in the production of high grade varnish.

The Mastic tree has been introduced into Mexico as an ornamental plant, where it is very prized and fully naturalized. The trees are grown mainly in suburban areas in semi-arid zones and remain undamaged although the regime of summer rainfall is contrary to its original Mediterranean climate.