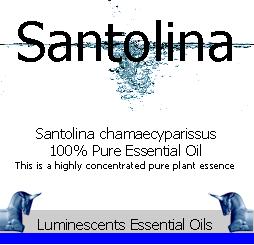 Santolina chamaecyparissus from which Santolina essential oil is distilled is a native plant belonging to the same family as Chamomile originating in  the central and western Mediterranean. It is sometimes known as Cotton Lavender or Grey Santolina even though it has no relationship with either Cotton or Lavender and resembles neither.

It is quite a small evergreen plant which can grow up to 50 cm in height and is densly covered in narrow, aromatic, grey-green leaves. It produces masses of yellow, button-like composite flower heads, held on slender stems above the foliage. The disc florets are tubular, and there are no ray florets. It is the leaves from which the essential oil is obtained, being the aromatic art of the plant.

Santolina essential oil is often used as an effective insect repellent and bunches of the dried plant can sometimes be found hanging in wardrobes to deter the clothes moth. It is also used as a popular Pot Pourri ingredient and an ingredient in herbal smoking mixes.

The essential oil is used in perfume manufacture and used as a vermifuge. It is considered a tonic and an aid in bronchial conditions such as persistent cough and asthma.

The major constituent is artemisia ketone which makes it considered as somewhat toxic and not really recommended for aromatherapy as a result.

chamaecyparissus means cypress like although the plant has nothing to do with cypress at all.