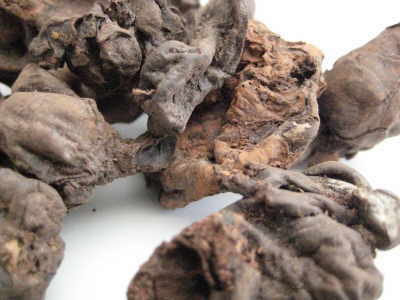 This Asian tropical tree has a straight tall trunk and its leaves are deciduous in winter. Red flowers with 5 petals appear in the spring before the new foliage. It produces a capsule which, when ripe, contains white fibres like cotton. Its trunk bears spikes to deter attacks by animals. Although its stout trunk suggests that it is useful for timber, its wood is too soft to be very useful.

The gum obtained from the tree ( from the flowers) is sometimes used as a substitute for Gum Tragacanth as a thickener in commercial food stuffs as well as its use in bookbinding and cosmetic preparations etc.

It is considered an aphrodisiac in some cultures and is sometimes used in Ayurvedic principles and Chinese Tradional Medicine to aid in Gynaecological conditions, menstrual discomfort, leucorrhoea and general women’s health although it is best known for its use in treating diarrhoea and in previous decades for dysentry. It has a reputation for helping with sexual deficiency and libido but with little or no research it is unlikely that this reputation is based on anything other than folklore. It is sometimes used for acid reflux relief.