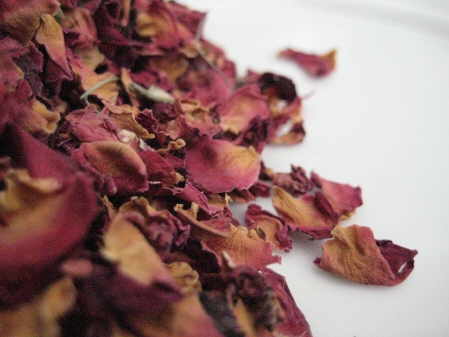 Red Rose Petals from the Apothecary’s Rose (Rosa gallica officinalis) have long been prized not only for their delicious aroma but for its untold beauty as well. Women have been compared to roses, and women have highly prized them. Cleopatra had her living quarters filled with the petals of roses so that when Marc Antony met her, he would long remember her for such opulence and be reminded of her every time he smelt a rose thereafter. Her scheme worked for Marc Antony fell madly in love with her. Such is the power of the rose.

This is an unusual recipe and is Edwardian in origin. Make sure if you are not using red rose petals purchased from an organisation like us that the roses you use are not sprayed with pesticides in any way. Florist obtained roses are completely unsuitable for eating because of the various processes used to grow them, force them and make sure they have a shelf life.

Infuse the rose petals with the rosé wine and leave for at least 24 hours in a sealed container agitating occasionally.

Beat the egg yolks with the sugar, the mixture will take on a pale yellow colouring as a result rather than the vivid yellow of the egg yolks. Add the milk and mix thoroughly and then stir over a low heat in a bain marie (basin standing in a saucepan of hot water but do not let the base of the basin touch the hot water).

Stir constantly and the mixture will thicken turning into a custard. Remove from heat and leave until cold.

Whip the double cream until it thickens and leaves loose collapsible peaks when you remove the whisk. Fold the cream into the cold custard. Strain the rose petals from your infused mix and fold the rose infused wine into the custard and cream you have previously prepared.

In ancient mythology, rose water was used in gourmet dishes and in love potions. Petals were used in healing incense and sachets, and burned to provide a restful night’s sleep. The essential oil was used in ritual baths to provide peace, love, and harmony within the self. The hips were strung like beads and worn to attract love. Rose petals sprinkled around the home calmed personal stress and upheavals in the home.

Ancient literature abounds with references to roses used for medicinal, botanical and cosmetic purposes and speaks of their use for feeding the body, the soul and the spirit. Medical texts written on stone tablet mention possibly a wild rambling rose, referred to as arnurdinnu, for medical purposes.

In Persia the much sought after rose oil and oil of attar was made from the heavenly scented damask roses and traded all around the world. The Greeks used rose-scented olive oils for perfume, to keep illness at bay and to anoint their dead. But the Romans outdid the Greeks when Nero, the hedonistic emperor, 1st century AD, dumped tons of rose petals on his dinner guests, nearly suffocating some.

The apothecary rose, R. Gallica Officinalis, first recorded in the 13th century, was the foundation of a large industry near the city of Provins, France. Turned into jellies, powders and oils, this rose was believed to cure a multitude of illnesses.

In England, the rose became truly “royal” during the 15th century War of the Roses: The House of York adopted a white rose (R. alba?), the House of Lancaster decided to take a red rose (R. Gallica?). The winner of this war, Tudor Henry VII, merged his red Lancastrian rose with the white rose of his York bride and thus created the Tudor Rose, the Rose of England.

American Indians were well aware of the uses and beauty of the rose. They too adorned their brides with roses. Some of their native medicines called for roses as well. They combined the petals of wild roses and the fat of bears and used this mixture to cure mouth sores. A powder was made from rose petals and this was used on any type of blister or fevered sores. They used rainwater that had been infused with roses to bathe sore eyes and the stringing pulp of the rose stem was mashed and applied to boils.

Red Rose Petals are official in nearly all Pharmacopoeias. Though formerly employed for their mild astringency and tonic value, they are to-day used almost solely to impart their pleasant odour to pharmaceutical preparations. The British Pharmacopoeia preparations are a Confection, Acid Infusion and a Fluid Extract. The Confection is directed to be made by beating 1 lb. of fresh Red Rose petals in a stone mortar with 3 lb. of sugar. It is mostly used in pill making. Formerly this was prescribed for haemorrhage of the lungs and for coughs. The United States official confection is made by rubbing Red Rose petals, powdered, with heated rose-water, adding gradually fine, white sugar and heating the whole together till thoroughly mixed. The Fluid Extract is made from powdered Red Rose petals with glycerin and dilute alcohol. It is of a deep red color, an agreeable odour of rose and of a pleasant, mildly astringent taste. The Acid Infusion is made from dried, broken-up, Red Rose petals, diluted with Sulphuric acid, sugar and boiling water, infused in a covered vessel for 15 minutes and strained. It has a fine red color and agreeable flavour and has been employed for its astringent effects in the treatment of Stomatitis and Pharyngitis. Its virtue is principally due to the aromatic Sulphuric acid which it contains and the latter ingredient renders it a useful preparation, in the treatment of night sweats resulting from depression. A Simple (non-acid) Infusion is mainly used as a flavouring for other medicines. It is also used as a lotion for Ophthalmia, etc. Syrup of Red Rose, official in the United States Pharmacopoeia, is used to impart an agreeable flavour and odour to other syrups and mixtures. The syrup is of a fine red color and has an agreeable, acidulous, somewhat astringent taste.

Honey of Roses, also official in the United States Pharmacopoeia, is prepared from clarified honey and fluid extract of roses. It is considered more agreeable than ordinary honey and somewhat astringent. In olden days, Honey of Roses was popular for sore throats and ulcerated mouth and was made by pounding fresh petals in a small quantity of boiling water, filtering the mass and boiling the liquid with honey. Honey of roses is used in gargles and lotions to wash sores, either in the mouth, throat or other parts, both to cleanse and heal them.

Red rose-water is well known, it is cooling, cordial, refreshing, quickening the weak and faint spirits, used either in meats or broths to smell at the nose, or to smell the sweet vapours out of a perfume pot, or cast into a hot fire-shovel. It is of much use against the redness and inflammation of the eyes to bathe therewith and the temples of the head. The ointment of roses is much used against heat and inflammation of the head, to anoint the forehead and temples and to cool and heal red pimples.

Rose Vinegar, a specific on the Continent for headache caused by hot sun, is prepared by steeping dried rose petals in best distilled vinegar, which should not be boiled. Cloths or linen rags are soaked in the liquid and are then applied to the head.

Oil of roses is used to cool hot inflammation or swellings and to bind and stay fluxes of humours to sores and is also put into ointments and plasters that are cooling and binding. The dried leaves of the red roses are used both outwardly and inwardly; they cool, bind and are cordial. Rose-leaves and mint, heated and applied outwardly to the stomach, stay castings, strengthen a weak stomach and applied as a fomentation to the region of the liver and heart, greatly cool and temper them, quiet the over-heated spirits and cause rest and sleep. The decoction of red roses made with white wine and used is very good for head-ache and pains in the eyes, ears, throat and gums.’

The first known paintings of a rose are actually frescoes. The earliest example was discovered in Crete around 1600 B.C. Scientist believe it was Greek colonist who brought the first rose to Italy. The Romans cultivated this great beauty and named it Rosa Gallica. Newly married couples were often crowned with roses. Roman high society women used petals much like currency believing that they could banish wrinkles if used in poultices. Rose petals were often dropped in wine because it was thought that the essence of rose would stave off drunkenness and victorious armies would return to be showered with rose petals from the civilians that crowded the balconies above the streets.

The oldest garden rose is the Rosa Gallica Officinalis, the apothecary rose. Old garden rose classes include the Albas, Centifolias and Damasks with their heady old rose fragrance. These have long been grown for their beauty and ability to grow in a most carefree manner. That they bloom only in mid-summer, as do their wild relatives, predating the later repeat flowering roses, is of little consequence in comparison with their easy care beauty and fragrance. Already in 35 AD the Roman writer Virgil wrote about the cultivation of roses and he extolled the virtues of “twice -bearing” roses, probably referring to the Autumn Damasks. But it would still be many centuries before the arrival in the West of the first true repeat-flowering roses form China from which the modern hybrid tea roses would be developed! During the Middle Ages the returning Crusaders brought with them roses from the Middle East.