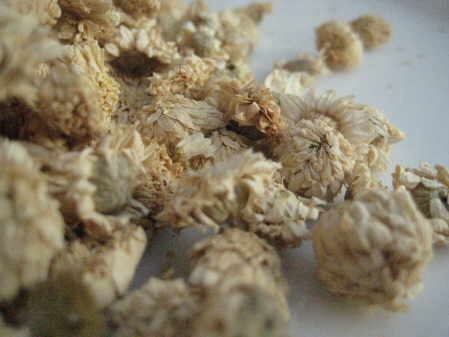 Roman Chamomile Flowers come from one of the two species of Chamomiles. It is sometimes known as English Chamomile.

The name Chamomile comes form the Greek word meaning “ground apple.” Its history dates back at least to ancient Egypt, where Chamomile tea was prescribed as a cold remedy. The Romans enjoyed it as a beverage, as well as an incense. Ironically, the name “Roman Chamomile” by which it is sometimes known, does not stem from this time. It rather comes from an arbitrary naming of the herb in the 19th Century by a botanist who happened to find some growing in the Roman Coliseum.

Chamomile is one of the oldest garden herbs, whose reputation as a medicinal plant shows little signs of abatement. Considered a universal remedy by the ancient Egyptians, Chamomile continues to be used today to battle illness, promote calm and relieve anxiety at bedtime. It is caffeine free and has a most superior flavour.

There are two plants known as chamomile: the more popular German chamomile (Matricaria recutita) and Roman, or English, chamomile (Chamaemelum or anthemis nobile ). Although they belong to different species, they are used to treat similar conditions. Both are used to calm frayed nerves, to treat various digestive disorders, to relieve muscle spasms, and to treat a range of skin conditions and mild infections.