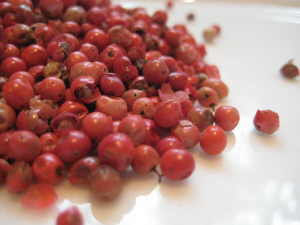 Red Peppercorns, usually the fourth component in mixed peppercorns, is not actually a member of the pepper family although it is often marketed as such. This faintly sweet spice from Reunion Island and South America does enhance the flavour of the other true peppers. However, black, white and green peppercorns are all products of the same plant but each is harvested and handled differently.

It is an evergreen tree that grows to around 15 metres in height and is a native of the Peruvian Andes. It now grows all over the Central parts of South America and has been naturalised into South Africa.

The word molle in Schinus molle comes from mulli, the Quechua word for the tree.

The Inca nation used the sweet outer part of ripe fruit to make a drink. The berries were carefully and painstakingly rubbed to avoid mixing with the bitter inner parts, the mixture was then  strained and left for a few days to produce a drink. It was also boiled down for syrup or mixed with maize to make nourishing kind of soup.