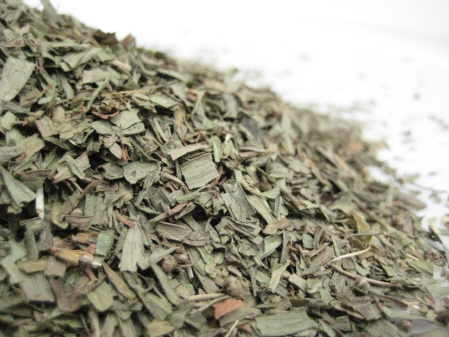 Tarragon Leaf (Artemisia dracunculus)  is a perennial herb in the family Asteraceae related to the wormwoods. It is native to a wide area of the Northern Hemisphere from easternmost Europe across central and eastern Asia to western North America, and south to northern India and Mexico. The North American populations may however be naturalised from early human introduction.

Tarragon grows to 20-150 centimetres tall, with slender, branched stems. The leaves are lanceolate, 2-8 cm long and 2-10 mm broad, glossy green, with an entire margin. The flowers are produced in small capitulae 2-4 mm diameter, each capitulum containing up to 40 yellow or greenish-yellow florets.

Tarragon has a spicy flavour reminiscent of anise. French tarragon (which this is) is the variety generally considered best and superior for the kitchen, but cannot be grown from seed. Russian tarragon can be grown from seed but is much weaker in flavour.

However, Russian tarragon is a far more hardy and vigorous plant, spreading at the roots and growing over a metre tall. This tarragon actually prefers poor soils and happily tolerates drought and neglect. It is not as strongly aromatic and flavoursome as its French cousin, but it produces many more leaves from early spring onwards that are mild and good in salads and cooked food. The young stems in early spring can be cooked as a tasty asparagus substitute.