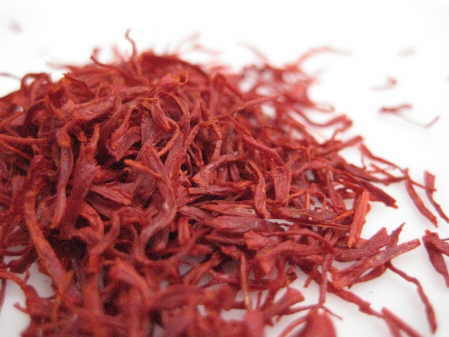 Saffron coupé (Crocus sativum) is a spice derived from the flower of the saffron crocus, a species of crocus in the family Iridaceae.It does not exist in the wild but seems to have been cultivated in ancient times from the wild crocus ( which is from Crete ) Crocus cartwrightianus

The spice, which has for decades been the world’s most expensive spice by weight, is native to Southwest Asia. It was first cultivated in the vicinity of Greece.

The word saffron originated from the 12th-century Old French term Safran, which derives from the Latin word Safranum. Safranum is also related to the Italian Zafferano and Spanish Azafrán. Safranum comes from the Arabic meaning yellow.

The trade in the spice goes back millenia and thee are instances of the spice being referred to in Ancient Greece, Rome and Egypt

The spice is subject to grading, the more style to stigma the better the quality – coupé is considered to be one of the best in quality.

Grades of Spanish saffron are coupé (the strongest grade, like Iranian sargol), mancha (like Iranian pushal), and in order of further decreasing strength rio, standard and sierra saffron.

The word mancha in the Spanish classification can have two meanings: a general grade of the spice or a very high quality Spanish-grown crocus from a specific geographical origin. Real Spanish-grown La Mancha has protected status and this is displayed on the product packaging. Spanish growers fought hard for Protected Status because they felt that imports of Iranian crocus re-packaged in Spain and sold as Spanish Mancha  were undermining the genuine La Mancha brand.