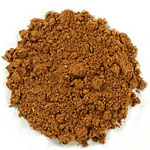 The formulae are based on the Chinese philosophy of balancing the ying and yang in food. A pinch of the powder goes a long way.

Although this spice is used in restaurant cooking, many Chinese households never use it in day-to-day cooking. In Hawaii some restaurants have it on the table.

Although the exact origins of five-spice powder are lost to history, there is some thought that the Chinese were attempting to produce a “wonder powder” encompassing all of the five elements. Then again, it’s possible that a cook accidentally stumbled upon this particular combination of spices, and realised its power to enliven the blandest dish. Whatever the case, there is no doubt that five-spice powder is unique.