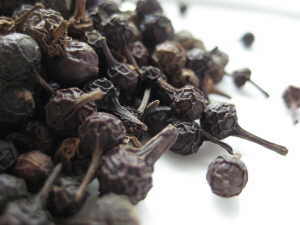 Cubeb  Pepper is a plant in genus Piper, cultivated for its fruit and essential oil. It is mostly grown in Java and Sumatra. It is also known as Tailed Pepper or Java Pepper.

It is used a substitute for Black Pepper and is considered to have a slightly more refined and fiery nature. It is rather a special pepper from the same family as the black peppercorns we all know but its use has been somewhat forgotten in the West since The Spice Wars brought the ever popular Black Pepper into prominence.

The fruits are gathered before they are ripe, and carefully dried. Commercial cubebs consist of the dried berries, similar in appearance to black pepper, but with stalks attached  the “tails” in “tailed pepper”. The dried pericarp is wrinkled, its colour ranges from grayish-brown to black. The seed is hard, white and oily. The aroma of cubebs is described as agreeable and aromatic. The taste, pungent, acrid, slightly bitter and persistent. It has been described as tasting like allspice, or like a cross between allspice and black pepper.

Cubeb came to Europe via India through the trade with the Arabs. The name cubeb comes from Arabic kababah, which is of unknown origin, by way of Old French quibibes.