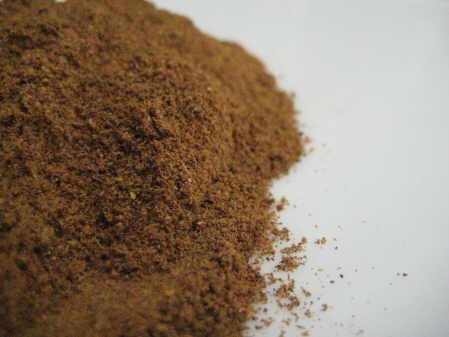 Ras el Hanout is a popular blend of herbs and spices and is used across the Middle East and especially North Africa principally in stews and casseroles like the Tajine. The name means “head of the shop” in Arabic, and refers to a mixture of the best spices a seller has to offer and some recipes have many, many spices in them for there is no set formula or recipe but rather each individual maker sets his own recipe although it is generally believed that if it doesn’t contain Ground Rose then it isn’t Ras el Hanout.

There is no set combination of spices that makes up Ras el Hanout, but most versions contain over a dozen spices, including cardamom, mace, nutmeg, cinnamon, and ground chilli peppers. Some recipes include over one hundred ingredients, some quite unusual, such as Ash Berries, Chufa, Grains of Paradise, Orris Root, Monk’s Pepper, Cubebs, Dried Rosebud, and the potentially toxic Belladonna and insects such as the beetle known as Spanish Fly (however, the sale of Spanish fly was banned in the spice markets of Morocco in the 1990s) and everywhere else before that date.

Usually all ingredients are toasted and then ground up together. Individual recipes are often improvised.

Ras el Hanout is used in Pastilla, the Moroccan squab/young pigeon, and almond pastie. It is sometimes rubbed on meats, and stirred into couscous or rice as well as being the stock spice blend for a tajine.

It is believed by many (and who am I to argue?) to be an aphrodisiac.