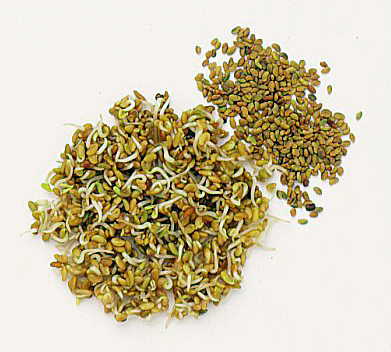 Alfalfa has played an important role as a livestock forage. Its use probably originated in Southeast Asia. The Arabs fed alfalfa to their horses, claiming it made the animals swift and strong, and named the legume “Al-fal-fa” meaning “father of all foods.”

The medicinal uses of alfalfa stem from anecdotal reports that the leaves cause diuresis and are useful in the treatment of kidney, bladder, and prostate disorders. Leaf preparations have been touted for their anti-arthritic and anti-diabetic activity, for treatment of dyspepsia, and as an anti-asthmatic. Alfalfa extracts are used in baked goods, beverages, and prepared foods, and the plant serves as a commercial source of chlorophyll and caroten.

The seeds can be added to any food preparation but are usually sprouted after soaking for about 8 hours first and then eaten as sprouts.

The most promising value for alfalfa as a health treatment is in the area of cholesterol control. Based on empirical evidence, fibres and chemicals in alfalfa appear to stick to cholesterol, keeping it from staying in the blood or depositing in blood vessels. It is an excellent source of nutritive properties with minerals, chlorophyll and vitamins. Alfalfa is high in chlorophyll and nutrients. Treating with alfalfa preparations is generally without side effects, however the seeds contain a slightly toxic amino acid L-canavanine.

Alfalfa sprouts are used as a salad ingredient. Tender shoots are eaten in some places as a leaf vegetable . Human consumption of older plant parts is limited primarily by very high fibre content. Alfalfa has the potential to be the most prolific of all leaf vegetable crops, processed by drying and grinding into powder, or by pulping to extract leaf concentrate.

Alfalfa ingestion, especially of the seeds, has been associated with various deleterious effects, and alfalfa seeds and sprouts can be contaminated with bacteria such as S. enterica and E. coli. The FDA issued an advisory indicating that children, the elderly, and people with compromised immune systems should avoid eating alfalfa sprouts. Ingestion of alfalfa preparations is generally without important side effects in healthy adults.