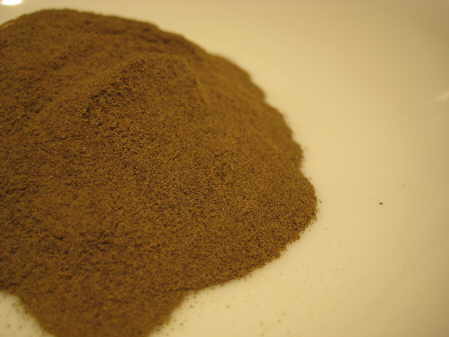 Bladderwrack Powder is from Fucus vesiculosusis, a seaweed found on the coasts of the North Sea, the western Baltic Sea, and the Atlantic and Pacific Oceans, also known by the common names Black Tang, Rockweed, Bladder Fucus, Sea Oak, Black Tany, Cut Weed and Rock Wrack.

It was an original source of iodine, discovered in 1811, and was used extensively to treat goitre, a swelling of the thyroid gland related to iodine deficiency. In the 1860s, it was claimed that Bladderwrack Powder, as a thyroid stimulant, could counter obesity by increasing the metabolic rate and, since then, it has been featured in numerous weight-loss remedies.

It has a reputation in helping the relief of rheumatism and rheumatoid arthritis, both used internally and as an external application upon inflamed joints. A chemical constituent of Bladderwrack Powder called alginic acid swells upon contact with water; when taken orally, it forms a type of “seal” at the top of the stomach, and for this reason has been used in several over-the-counter preparations for heartburn. The same constituent gives it laxative properties as well.