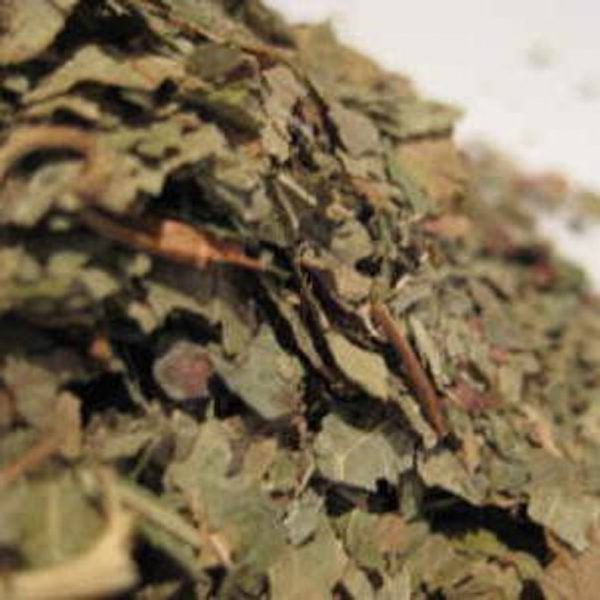 Blackcurrant Leaf is a native to temperate parts of Central and Northern Europe and Northern Asia where it prefers a damp fertile soil and is widely cultivated both commercially and domestically. It is winter hardy but cold weather at flowering time during the spring reduces the size of the crop of berries.

Because the infused leaves are diaphoretic and diuretic, they aid in the elimination or reduction of bodily fluids, they are believed to lower vascular pressure. The leaf infusion is also believed to stimulate the sympathetic nervous system and may help with stress-related aliments.

In Russia, Blackcurrant Leaves are used as a flavouring for tea and preserves, such as the delicious salted cucumbersthey are famous for; the berries for home wine making. Sweetened vodka is also infused with blackcurrant leaves making a deep greenish-yellow alcoholic beverage with a tart flavour and very astringent taste. The berries may be infused in a similar style with a very obvious colour difference to the end drink. In the UK 95% of the blackcurrants grown end up in branded cordials and fruit juice concentrates.

It has been used for centuries for its medicinal properties over and above its food source and it is that for which it is primarily valued. As Quinsy berries, the plant’s popular name, clearly indicates, blackcurrants were first used as a home remedy for inflamed sore throats. Quinsy is a form of tonsillitis.

A wash or poultice of blackcurrant leaves can be applied to infected wounds and abscesses.